Hype or not? Both! 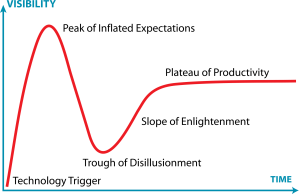 IoT is hotter than ever! Gartner just placed IoT at Peak of Inflated Expectations in their Hype Curve and forecast 5-10 years until the Plateau of Productivity. But our baby is growing much faster than anything else we have seen before and I stick to my previous view that our baby will be grown up, but still young, 2016 after only three years as teenager. Good enough technology and infrastructure are in place since a couple of years and when organizations started to go from Powerpoint and thinking to trials and pilots we reached the teens. Four things have been missing to leave the teens behind: solid participation from the IT players, a hot M&A market, active and seriously engaged enterprises and efficient easy-to-use prototyping tools for users of IoT. All these things are starting to happen now which is one of the reasons why I dare to challenge Gartner on their projection. But there is another aspect of IoT which is underestimated: how the value is created.

In most cases we build something and when it’s done we start harvest. And if customers like what we built it takes off. It might take a couple of years at least  to plan, develop and start produce, then we start market and after another year or so it might take off. That explains Gartner’s 5-10 years to Plateau of Productivity, if one ever gets there. But IoT applications deliver value when the information created is distributed to an IT system, shows up in an app, makes an alarm go off somewhere or change a road sign. Initially all IoT applications had to be created end to end – from sensor to terminal – which made them expensive to make and maintain. But now we can leverage existing networks, platforms, tools, terminals and applications making it much cheaper and quicker. So far we have seen this primarily in the consumer market where a connected sensor providing data to an app has been good enough. In enterprises data management and delivery is more complicated and changes in processes and business models takes time, but they are getting there. When they do, the operational value (cheaper, faster, etc) will be obvious and the strategic value (brand, innovation, employer attractiveness, etc) will be visible in the horizon. One only has to look at what GE is doing with Industrial Internet to understand that the impact will be massive.

Everyone promoting the story about billions of connected devices delivering data to impressive Big Data systems creating trillions of $ benefits clearly put IoT at the peak of inflated expectations. But all hard-working organizations and entrepreneurs working on industry or company specific IoT applications, well-integrated and cleverly implemented, are changing the world very fast. These efforts will start pay off soon putting competitors who haven’t started yet in a very difficult situation similar to when the frequent flyer program happened or Richard Fosbury jumped 2.24 at the Olympic Games in Maxico City 1968  using a “redicolous” new technique.

The only major difference between when we connected people and businesses to the Internet and when we connect things is that ignorance will not be an acceptable excuse this time. Beyond some clever start-ups the winners will be organizations who best understand when and how to improve their business using IoT solutions.

Inspiring example: use of M2M to change behavior

The key deliverables of M2M are efficiency, security and sustainability. M2M can also deliver convenience which mainly is relevant for the people involved. Well designed M2M implementations often deliver across all of these areas.

Public bus transportation is an important part of the transportation system. To pick the bus should be safe, energy-smart and help improve efficiency in the city. And except for peak hours when buses might be full, the ride should be convenient. But even though buses are quite similar the drivers have different driving style. A recent study at the University of Lund concludes that it is more dangerous to go by bus than by car in cities. Injuries from traffic accidents with buses are rare but a lot of people hurt themselves when they fall during the ride, when jumping on or off the bus or at the bus stop. This is one area where the driver makes a difference. Energy consumption, impact on traffic flow and convenience for the passengers are other areas where the bus drivers knowledge and style makes difference.

The public bus company in the city of Borås in Sweden are now installing a M2M system in the buses which measures how well the drivers drive. The metric used is passenger comfort and a lamp indicates performance: red means poor, yellow is ok and green is great.

I like this a lot since it’s an easy way to improve something in many different ways. Just by showing the performance the drivers will improve their driving – it is an old truth that what is measured gets better. The project makes the company and it’s employees aligned to what is considered important. And last but not least, the “red drivers” get training and the “green drivers” a bonus. What a wonderful way to make things better.