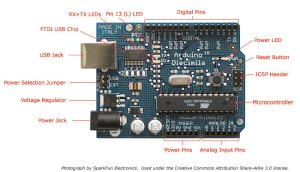 There are many reasons why M2M solutions will hit society, businesses and people with enormous power. Most of them relate to what happens when we connect things and put computing on top but one specific force is democratization of development tools – a similar brutal force that Basic and Hypercard gave to the PC industry, and that Apple provided the mobile industry with the App-concept. When thousands or millions of developers get going, innovation, specialization and competition happens big way.

Arduino is an open well documented physical platform developed 2005 in the Olivetti town Ivrea, Italy. It is a platform which collect, compute and communicate data which makes it the perfect prototyping tool for students, hobbyists and professional developers to realize their device ideas. Today the affordable and easy to use development kits can be bought at the Radioshacks of the world. Nobody knows how many Arduino developers there are but over 300.000 boards have been sold, the ratio of cloning is currently estimated to one per original board and Arduino skills are more and more often requested in CVs.

Arduino supports Windows, Mac OS X and Linux and there are a number of boards available. They are really affordable and pre-assembled Arduino modules cost less than $50. The community is rapidly growing and it’s easy to join by for example following the Arduino blog.

Among the companies using Arduino for their tools and services are Google and Telefonica. And the more I dig into the world of M2M the more spectacular examples of Arduino projects I find. Imagine this: a 14 year old boy in Chile developed an Arduino machine which post a Tweet when detecting an earthquake and now this alert is sent to some 30.000 followers on Twitter.

This is only the beginning. The opportunities are massive but some risks are also involved. Many companies will experience difficult competition from unexpected directions and some will leverage these forces to strengthen their position in the market. Governments will see completely new solutions to old and difficult problems. And consumers will be offered new innovative services, many of them replacing products we buy today.

I’m fortunate to work and live in the middle of this period of great change!

ABB acquires the Wi-Fi mesh pioneer Tropos Networks to strengthen its Utility Communications product group. California based Tropos Networks has delivered a large number of wireless metropolitan and campus networks over the last ten years or so and I would even say that they made Wi-Fi mesh a viable metro network solution to the market.

M2M is required to solve the efficiency problems, the security issues and the sustainability challenges in the world. And many of these applications will use private networks for financial and/or security reasons. Each of these areas will develop to become ICT systems in the size of the Internet which is why really large global players invest early on. I suggest you keep an eye at GE, ABB, Siemens, IBM and similar players.