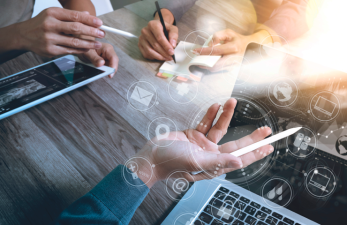 The rapid growth of Internet some twenty years ago brought massive innovation across countries and industries. Creative and ambitious people of all sorts gathered around the opportunity followed by enormous amounts of money, people leaving their established employers for startups and a gold-digger style era.

Web, Startups and VC’s was all of a sudden words used by the masses and in almost no time we had thousands of startups and hundreds of VC’s in Sweden alone. A couple of years down the road came the enterprise response: corporate innovation. Companies started their own VC’s, incubators and M&A activities, but some years and a lot of dollars later most of them realised that this wasn’t as easy as it first appeared. Finding the right companies to work with and integrating their solutions in the existing operations was just two of the challenges that often were singled out as difficult. Another common issue was the objective of the investments in startups: strategic or financial. Both are equally good reasons but require very different efforts and skills. At this time I was working as a partner in a VC with experienced people from the industry focusing on wireless technologies – receiving a lot of calls from enterprises who wanted us to take over their portfolio of startups.

Now, roughly ten years later, Corporate innovation is back! This time it’s the two new buzzwords IoT and Digitalisation that are driving the renewed interest. But let’s step back and look at what this really is, and maybe demystify the two terms a little bit.

IoT is all about connecting the real world to the Internet where we already have people and organisations. It is harder to connect physical things to the Internet than developing services in cyber space which can be rolled out across the globe in almost no time. And it’s even harder if those vehicles, ventilation systems, machines or dishwashers are already out there and have to be retrofitted with connectivity. Still the development follows the same phases as when we connected people and organisations to Internet – connectivity, operational value and strategic value – so we can learn from history.

Digitalisation started in the fifties and is nothing new. Enterprises have digitalised bits and pieces of processes with some value. It’s like building a bridge with the last few meters missing. But the real value appears when a process is fully digitalised – when the real world, IoT, is included. Smart electrical meters are fine, but of little value as long as the energy companies still print the bills to send home to their customers. But more importantly – we can apply turbo mechanisms like machine learning to a fully digital process and that suddenly changes everything.

Digital Transformation is what it’s all about and this is a journey which has to start and continue in-house with our own people and processes. It is nothing one can buy from a consultant or from M&A activities – there are no short cuts. If you don’t have the right culture and processes to support the transformation you urgently have to change, top down. It is a well-known fact that people and processes, rarely technology, cause the problems of change. Technology driven innovation has to happen in small sharp teams, but massive value creation requires large established organisations. Corporate innovation programs are needed but startup activities are only going to work if they are implemented well and seriously backed by the entire organisation, top down.

500 Startups recently released a study among more than 100 corporate executives and found these five best practices for working with startups:

2. Take a portfolio approach and de-risk their innovation efforts by running many startup experiments.
3. Set specific innovation objectives that guide the kinds of startups they look for and how they work with them.
4. Remove the red tape and create a fast-track process for working with startups.
5. Understand that partnerships are a two-way street and figure out how to add value to their startup partners.

I like the five points above, but would add a more generic one: M&A, incubation, acceleration and innovation programs are all difficult to master, so partner with organisations who already have figured it out. And remember that the best way for a fantastic startup to become successful is to help them work with several customers and not only with you.

We created THINGS in Stockholm 2014 to collectively learn “how to transform innovation in small sharp companies to massive value creation in large ones” and have today some 40 enterprises in our efforts and a community of some 200 relevant startups including the more than 50 member companies we have at THINGS. Last year we created Ignite Sweden together with two leading incubators, STING and LEAD, where we tried to find a light version of what we do at THINGS. We ended up arranging 614 manually prepared meetings between 37 corporates and 138 startups in 9 match making events and by now 16 commercial collaborations have been established. Based on the immediate success we just launch Ignite Sweden 2.0 with more incubators and improved preparation and follow-up after the meetings. We had some international corporates joining us last year and are looking to expand that as well.